In April of 1945 the New Providence Baptist Church was organized by Reverend Clarence E. Scott in a Presbyterian Church that was located at 19th and Connecticut Streets in San Francisco.  From there, the church moved to 1 Kohala Road, while Pastor Scott preached the gospel to win souls for Christ. The church moved from 1 Kohala Road to Divisadero and Geary Streets, using the Hall of the Most Worshipful Sons of Light-AF&AM.  Several years later, the church relocated to Bush and Laguna Streets.  Pastor Scott and the membership never became discouraged when they had to move from one location to another. They continued fighting on the battlefield for the Lord. The church then relocated to 1408 O'Farrell Street, which was completely remodeled into a beautiful church.  Due to redevelopment, the church was required to move yet again. The new site was located at 309 Lyon St., where New Providence remained for several years.

Pastor Scott always dreamed of someday erecting a beautiful edifice and with the help of God and the support of the faithful members, his dream was realized in 1974, when he and the congregation marched to the present site at 218 Granada Avenue.  Pastor Scott continued winning souls for Christ, and the membership at New Providence grew. Eventually, the membership outgrew the new church home and with God's blessing and the overwhelming support of the entire membership, New Providence underwent a complete remodel.

In October 1988, Pastor Scott and the entire membership marched from a temporary worship location into the current beautiful building that includes the “Leanna Mattox” social hall which was once the sanctuary.

Pastor Scott's dream was realized. With the help of the members, the church has continued to flourish, installing stained glass windows, obtaining furniture for the classrooms, completing a church library and installing ceiling fans and chandeliers

In October of 1995, as a result of a successful “Building Fund” program, the church's million-dollar mortgage was burned. Praise the Lord!  New Providence continues to strive for the goal of serving our Lord and Master, Jesus Christ!

On March 29, 1999, Rev. Michael Gilmore was installed as Pastor of New Providence. 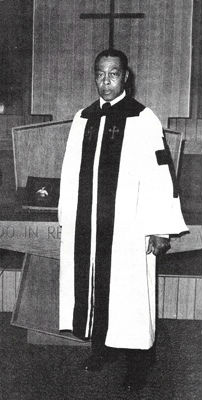